The Board of Directors is the governing body of Horizon Power as prescribed in the Electricity Corporations Act 2005 (WA).

The primary role of the board is to set the strategic direction of the organisation, approve major expenditure and provide advice to the Minister for Energy on regional power issues. 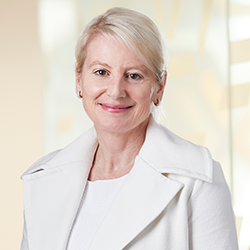 Samantha has a distinguished career and extensive experience across the energy and resources sectors, including the Clean Energy Finance Corporation, Synergy and Woodside. She is also the Pro Vice Chancellor of Engagement at the University of WA.

She has detailed knowledge of regional Western Australia and has served on the boards of several businesses and non-government organisations.

Ms Tough completed a Bachelor of Laws and Bachelor of Jurisprudence at the University of Western Australia and worked as a barrister and solicitor before progressing to the commercial sector. She is a Fellow of the Australian Institute of Company Directors. Peter has more than 38 years’ of experience in the Western Australian electricity industry. Most of this experience was in the financial area, including periods where he was the General Manager Finance and Administration followed by a period where he was the General Manager Emerging Business which included the development of renewable projects for Western Power prior to its disaggregation in 2006.

He was a Director of Eneabba Gas Ltd from 2006 to 2010. Peter has been involved in a number of reviews into the structure of the electricity industry in Western Australia, commencing with his appointment as Executive Officer to the Energy Board of Review in 1992 which resulted in the disaggregation of SECWA. Peter was Chairman of the Merger Implementation Group which provided the oversight into the merger of Verve and Synergy.

Peter holds a Bachelor of Economics, Master of Business Administration from the University of Western Australia and is a Fellow of the Certified Practicing Accountants Peter was appointed Chair of the Audit and Risk Management Committee upon his appointment to the Horizon Power Board in November 2014. Ivy is a Principal Consultant with CSA Global and is a corporate governance specialist. She has led mine geology and resource estimations teams in China and Australia. Her previous roles included a national adviser for geology and mining for the Australian Securities and Investment Commission (ASIC), and was heavily involved in the ASIC contribution to the 2012 JORC Code update, the 2015 VALMIN Code and the ASX listing rules for mining and oil and gas.  Ivy was awarded an Australian Public Service Australia Day medal in 2013 in recognition of her outstanding services for this work.

Ivy was also the first woman to Chair the Perth Branch of the Australasian Institute of Mining and Metallurgy (AusIMM) in 2013 and 2014 and is currently director of the AusIMM nationally.

Ivy has been a Women in Mining WA mentor for women in the mining industry since 2013, and for at-risk high school students with the Smith Family, through their iTRack online mentoring program.​

Kylie is an accomplished and experienced banking and finance executive with over 20 years' experience within the industry. Across various senior roles with prominent Australian banking and financial institutions, she has garnered broad market exposure to a variety of industry and brings acumen in the key areas of finance, strategy, culture, governance and risk. Gail has held various roles in Aboriginal relations and is experienced in advocating for regional and Aboriginal communities. She has served on several boards and is currently Chairperson of the Esperance Tjaltjaraak Native Title Aboriginal Corporation, the South East Aboriginal Health Service, the Goldfields Esperance Development Commission and a board member of the Australian Golden Outback. Sandra has over 23 years’ experience as a banking and finance lawyer, specializing in corporate, construction, resources, energy and property financing. She was formerly a partner of a top tier national law firm, leading the Finance Division in Perth. Sandra has held various senior leadership positions with National Australia Bank Limited, most recently heading up the Corporate and Institutional Bank Legal team in Western Australia and Queensland.

She holds a Bachelor of Laws from the University of Western Australia, and post graduate qualifications from both the Securities Institute of Australia and the Australian Institute of Management.

Michael joined WA Treasury in 1997, after working in the Department of Foreign Affairs and Trade and the Commonwealth Treasury.

He was permanently appointed Deputy Under Treasurer in September 2016 after having acted in the role since February 2014. This followed more than five years as the Executive Director of Treasury’s Economic business unit.

In his role, Michael assists the Under Treasurer in the management of Treasury, with a primary focus on whole-of-government budget management and fiscal strategy and other priority strategic issues. He is also responsible for Treasury’s corporate service functions, and providing advice and strategic direction on public sector reform issues.

Michael is also Deputy Chair of the Western Australian Treasury Corporation Board.

Michael holds a Bachelor of Economics (Honours) from Murdoch University.